Belief. It’s what makes all things possible. Success and failure depend on it. If you have yet to find success, most likely it’s because you don’t understand what belief really is.

Here’s the tale of my own struggle with Belief.

I stumbled into the network marketing industry back in the mid 90s – can’t remember if it was 1996 or 1997. Talk about naive! I didn’t even know that’s what it was, much less how someone was supposed to make money at it! Like most newbies, I struggled. Mostly because of that ignorance. But even after joining with a very good company, and with a team that taught me the basics, I still struggled.

Why was it so hard to make something so simple work for me like I saw it working for others?

I saw people really excel with my company. People who seemed to me to be … how shall I put this? “Not the brightest crayon in the box.” And I was dumbfounded! I couldn’t understand why people were saying “yes” to them, but not to me. “I’m smarter than they are. I’m prettier than they are. (heehee) I have better tools and systems than they do.”

I even tried some other businesses that should have been much easier to be successful with, because they had simpler, duplicatable systems that are practically fool-proof. Still success eluded me.

Again, the subject of Belief kept coming up. “Yes, I believe the company, product, and compensation plan are legitimate and valuable. Yes, I believe our system is easy and I’ll be successful with it.” So I began to wonder, why, after months of “working it” I hadn’t found that success when others were joining us and having instant success?

I would even pray at the beginning of my work day that God would Bless my endeavors, and lead me to the people who needed my help and Bless our businesses with success. It worked, to a degree. He’d show me where to “hunt” and I’d gain a new partner or two. But the duplication (that’s required for financial success in this business) would never appear.

One Sunday, I sat down in Sunday School, and the first scripture read was Matthew 9:27-30 (Revised English):
As he went on from there Jesus was followed by two blind men, shouting, “Have pity on us, Son of David!”
When he had gone indoors they came to him, and Jesus asked, “Do you believe that I have the power to do what you want?”
“We do,” they said.
Then he touched their eyes, and said, “As you have believed, so let it be,” and their sight was restored…

At that point I could have gotten up, DANCED out of the room, and gone home, for I had received my revelation for the day! 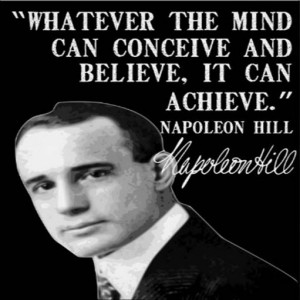 YES! I believe God has the power to Bless my business and deliver unto my family the financial independence that I’ve been praying for. You’ve heard, “Anything a man can conceive and believe he can achieve.” And it has always been that word, Believe, that has stopped me. I could conceive it, and knew it could happen, because I was seeing the proof all around me. “Others are doing it, therefore, so can I.”

The problem is that I believed that He would do it for others, but not for me. I just didn’t believe it FOR ME.

I’ve always marveled at how so many humans are afraid of Satan and his Demons. I’ve never been afraid of them! There’s never been a question of doubt that I am God’s Child, I belong to Him, and NOTHING – no principalities, nor humans, no spirits – can have any power over me, until and unless I invite it into my life and give it permission to do so.

“In all things we are more than conquerors through the One who loved us.
We are sure that neither death nor life, nor angels, nor principalities, nor things present, nor things to come, nor powers, nor height, nor depth, nor anything else in all creation, will be able to separate us from the love of God in Christ Jesus our Lord.” (Romans 8:37-39)

Even as a child, before I’d ever red those verses nor heard of an “Affirmation of Faith,” I knew within my soul that that was true. Therefore, if I knew that I’m more than a conqueror through Jesus, then how could I ever have any doubt that I, and my family, is worthy of God’s Blessings “pressed down, shaken together, running over?”

That unshakable Belief within my soul was incongruous with the doubt within my heart. It was up to me to say “Get behind me, Satan.” I needed more ammunition.

The next day after receiving this revelation in Sunday school, I was talking to a pastor friend who explained to me that, in the space and time between “Amen” and “there it is,” the Devil will test our belief. One of his tactics is to belittle us, and cause us to belittle our selves, believing we’re unworthy.

I answered that it’s because we’re often taught that sometimes the answer is “No.” But my pastor friend explained that a delay doesn’t imply denial. That God is more concerned with our Character, so wants us to work a little more on ourselves before he brings our prayers into fruition.

And I realized that the success I kept seeing of those I deemed “less intelligent” than myself, and assumed that they had the “faith of a child,” yet wondering how some of them could have faith in something they were ignorant of and in which they didn’t believe in the first place, was really that they were too ignorant to have doubt in the first place.

Which explained why these people could be so successful in their business lives, yet the rest of their lives were in shambles! Broken marriages, children who didn’t know them, and sometimes “losing everything” and having to start over again…  repeatedly.

Belief. It comes from the assurance that our ultimate goal is Fulfilling the Kingdom of God. And THAT belief is everlasting.